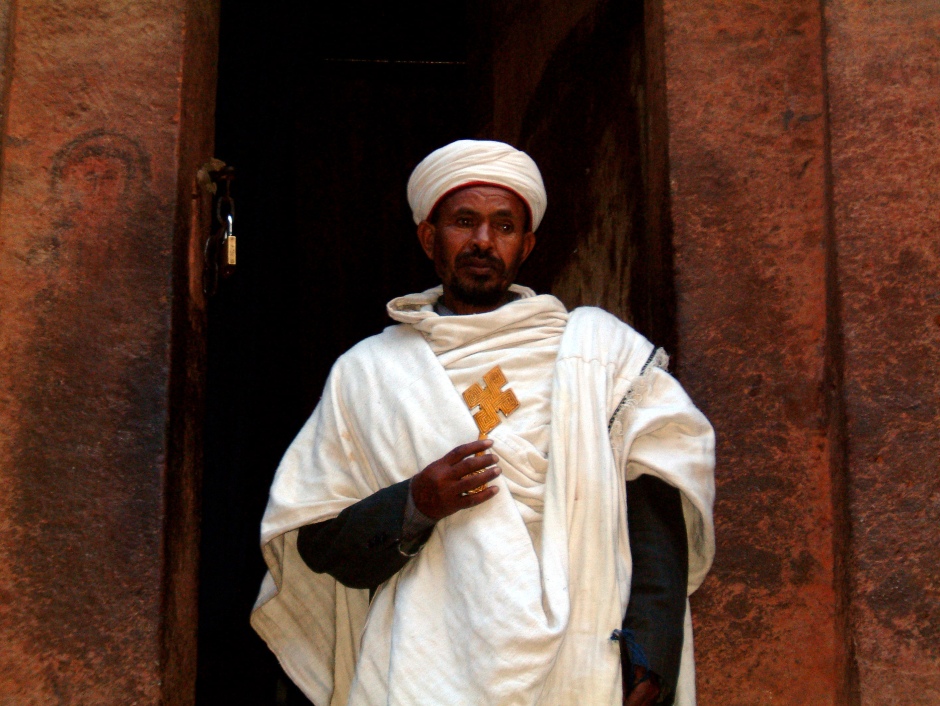 IT’S BARELY DAWN and I’m cold, tired and hungry. Last night it seemed like a good idea to get up at 5am to see a Sunday service in one of Ethiopia’s famed rock churches, here in Lalibela.

This morning, despite the inevitable grumbles, it feels like an even better one. Not that very much is happening; a cluster of priests sit on carpets in one corner of the courtyard; a group of worshippers gather round the church door. If you go in, you can’t leave until the service is over. And since that might take three hours, it’s better to be outside.

Scattered around the church, a few other Ethiopians pay obeisance to the its walls or windows. Outside the walls, a small line of pilgrims say their prayers on the rock from which the church is carved, looking down in to the chamber where the rest of us are. A few loudspeakers, strung together with a mish-mash of wiring and string, struggle to put out a tinny version of the service going on inside.

The extraordinary thing is that this building has been in use for close to 800 years and that the Ethiopian Church’s roots go back thousands of years before the time of Christ. The long, white cotton robes being worn by all around, the ageless rock, the weather beaten church and the indecipherable prayers (in Ge’ez, a language used today only by the Ethiopian Orthodox Church) all combine to give the impression that these same prayers have been said in this same spot for millennia.

Legend has it that King Lalibela, who ruled from the late 12th to the early 13th century, fell into a coma (after being poisoned by his brother, since you ask) and was carried away to heaven. There, he was shown a plan of Jerusalem (at that time the city was in the hands of the Muslims) and instructed to build a replica. His builders worked during the day and angels finished the work at night. Other versions of the legend say he built it all himself in three days and nights with the help of the angels.

Certainly, facing the reality, it’s easy to see why these amazing structures could be considered not to be the work of man. Your brain hurts just thinking about the planning and skill involved in chiselling every door, window, window sill or ornament out of one piece of solid rock. Get it wrong, and your church has no porch.

A vast amount of waste rock (a church full and more) had to be carried away for every element that was carved. The good news for the carvers is that the volcanic rock of Petra is soft; the bad news for tourists is that it erodes easily, so many of the buildings are now protected from the elements by corrugated iron roofs and rickety scaffolding.

The first European to visit Lalibela was Francisco Alvarez, a Portuguese friar, who came in the 1520s to convert the Abyssinians to Roman Catholicism. Knowing that few people in a Europe convinced of Africa’s primitive nature would believe his tales of Ethiopia’s marvels, he wrote: ‘I swear by God that all that is written is the truth, and there is much more than I have already written, and I have left it that they may not tax me with its being falsehood.’

Fortunately, thanks to the power of photography, I do not have to underplay Lalibela’s wonders to ensure my credibility. Even so, it’s hard to find words to do justice to what has been described as the Eighth Wonder of the World. Catch the eye of a fellow tourist and the unspoken thought is communicated: @No one at home is going to believe this!’

There are two distinct groups of churches at Lalibela, many linked by subterranean passages that allow the priests to go about their duties hidden from the eyes of the public – more specifically from women. The western group are freestanding, carved completely out of the rock. The eastern group are still attached in places to their rock mantle.

The passages and the 11 churches combine to make a maze that, because of Ethiopia’s lack of tourism – or simple faith in the goodness of others – you can wander at will. Priceless artifacts abound: silver crosses, 500, 600 or 700-year-old manuscripts and paintings. A priest will bring out a cross and casually tell you it was the original on Lalibela’s prayer staff. It’s seven kilos of solid gold, was once stolen but then returned and has miraculous powers. Then he’ll show you an icon of St George that looks several hundred years old – until you notice peeping from under the saint’s robes are blue jeans and snappy trainers. Past and present mingle as one.

Inside a rock-cut chamber, the walls and floors covered with oriental carpets infused with the scent of centuries of burnt incense, the only reminders of the modern world outside are a few bare neon tubes, your camera and the priest’s sunglasses (to protect his eyes from flash photographs). Oh, and a wall clock – which every church appears to have, but none of which seem to work. A pithy statement on the passing of time or just lack of batteries – who knows.

Lalibela is the holiest site in Ethiopia. Created as a new Jerusalem, it is split by the River Jordan whose banks are lined with the graves of those who wished to be buried in the shade of its holy trees. Pilgrims come from throughout the country to seek blessings from its churches and its priests.

It is also a place for hermits who live in tiny holes in the rock near the holies sites. Most are genuinely pious but a few have spotted a good revenue stream in asking tourists for donations in exchange for photos. In fact, in a town where most inhabitants suffer from malnutrition and one in three are unemployed, the churches are the only source of wealth. Tourism offers real hope for progress, provided a balance between old and new can be struck. One can only hope the authorities will avoid the mistakes of that other famed rock city, Petra, where massive hotels were built, destroying much of the atmosphere and bringing little benefit to locals.

Towering over the town is Mount Abune Yose. It’s a steep 1,200m climb of some three hours on foot (or 90 minutes by mules). On the way, you pass lines of women carrying wood down into town, farmers taking produce to market and pilgrims heading to their less-secular destination.

The climb is rewarded by spectacular views of a green and fertile country (just after the rains) and the hidden monastery of Asheton Maryam – also cut out of solid rock. Here, the priest reverently opens a series of illuminated manuscripts, the oldest of which is 700 years old and dedicated, like the monastery, to the Virgin Mary. He tells us the book is a guarantee of pregnancy to women who are blessed by it. One’s cynicism stands little chance against the priest’s simple and obvious faith.

Back down in town, a wander round the market that has been attracting people from the surrounding countryside – many walking from before dawn – is a salutary reminder of Ethiopia’s poverty. A few second-hand clothes, some bright plastic buckets – these are the highlight. The rest is basic foodstuffs and simple agricultural tools, hoes and rakes unchanged since agriculture began. The main product is tef, the grain that, fermented and cooked as a pancake called njera, is the basis of every main meal. (Looking like the inside of a sheep’s stomach, it is an acquired taste.)

Despite the green hills, it’s obvious that life here is a day-to-day existence, with no cushion of wealth or health against a time of famine. Inside one of the finer rock churches, Bet Maryam, a central column is covered with gilded cloth. On it is written the past and the future of the world. I suspect that, in Lalibela at least, they keep it covered because they know the future often brings little worth.

I travelled with Rainbow Tours: www.rainbowtours.co.uk

Error: Twitter did not respond. Please wait a few minutes and refresh this page.