IN MAY 1860, ‘Pony Bob’ Haslam was riding the Pony Express east from Friday’s Station on the California-Nevada state line (where the resort of Lake Tahoe is today) to Buckland’s Station, 75 miles away in Nevada. At Buckland’s his relief refused to ride because of Indian trouble, so Haslam carried on to Smith’s Creek – a total distance of 190 miles without rest, returning after a nine hour break with the westbound mail. The 20-year-old born in London, England, had covered 380 miles on his own during an Indian war, the longest ride ever by a Pony Express rider.

This is the kind of man commemorated every June in the Pony Express ReRide which follows the 1,400 original miles on horseback, doing it in the ten days of those iron men of old. Of course, these days we have the benefit of good roads, motorised back-up and friendly natives.

In 2009 I had the honour to be the first non-American since those early pioneers to ride a stage of the Pony Express. It’s a solemn moment, to don the uniform of red shirts, brown waistcoat and yellow bandana and take the same oath as those first riders. ‘I do hereby swear, before the great and living God, that during my engagement… I will, under no circumstances, use profane language. I will drink no intoxicating liquors; that I will not quarrel or fight with any other employee…’ 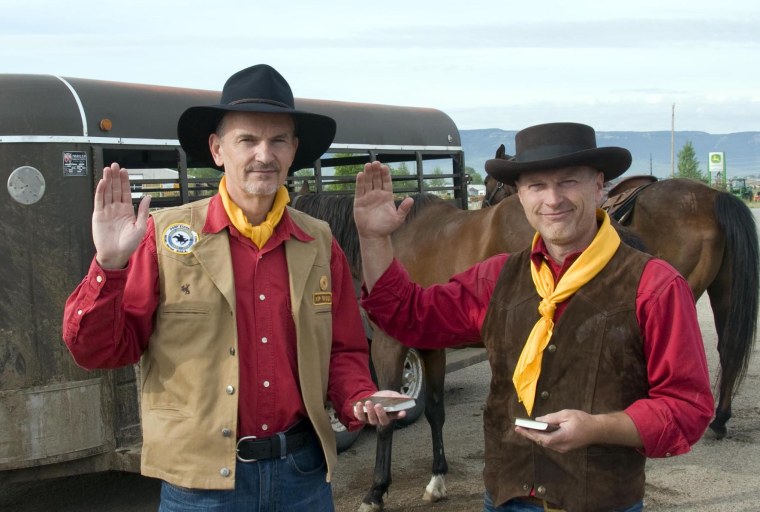 Then it’s into the saddle for a five-mile ride from Casper, Wyoming, one segment in a chain of riders that links Sacramento, California, to St Joseph, Missouri, in ten days of non-stop, day and night riding. The Pony Express record for the route was seven days and 17 hours, for the delivery of Lincoln’s Inaugural Address, during which Haslam set one more record: the company’s fastest ride ever. He took a mere eight hours to cover 120 miles, using 12 relay horses. I wonder if he was allowed to celebrate with some ‘intoxicating liquors’?

The year 2010 was the 150th anniversary of the Pony Express. The route alternates from east to west and in 2010 started in California. However, the Pony Express route also followed the Oregon Trail and the Mormon Handcart Trail. If you want to trace the steps of all those other pioneers by heading west, you should start the 1,900-mile Pony Express National Historic Trail in St Jo.

St Joseph, Missouri, bills itself at the town ‘Where The Pony Express Began And Jesse James Ended’. Central to both events is the Patee House Museum, where legend has it the very first Pony Express rider actually rode into the mail room to pick up the ‘mochilla’ – the saddle bag that carried the post. The house in which Jesse James was shot in 1882 also now stands here and you can see a hole in the wall from the bullet that killed him. You know you’re in the Wild West when you start thinking you might be being told tall tails, of course. The ReRide starts or ends at the Patee House, built as a luxury hotel in 1858.

Nearby is the Pony Express Museum, on the site of the original stables and with a very good tableau inside showing that first rider preparing to leave. The Leavenworth & Pike’s Peak Express Company (to give it its proper name) was formed by William H. Russell, Alexander Majors and William B Waddell in April, 1860. In June 1860, Congress authorised a bill subsidising the building of a transcontinental telegraph line, dooming the fledgling company almost as soon as it was born. It lasted 18months, until October 1861.

From St Joseph, the Pony Express Highway (US36) runs for 140 miles to the Kansas border. Taking the mail out of St Jo last year had been a 16-year old on her first ReRide. Soon after I waved her off, I was driving through the darkness towards Kansas City in pouring rain. My wipers struggled to clear my windscreen, while flashes of lightning lit up the night sky. Somewhere out on the prairie, I pictured that young rider still in the saddle and knew then that the spirit of the Pony Express lives on.

My first ride was out of Casper WY and up to The National Historic Trails Interpretive Center which overlooks the town. The centre provides an exciting overview of the Pony Express, Oregon and Mormon Trails and I particularly enjoyed the simulated ride across a raging river in a wagon.

The road across Wyoming’s level prairie must have seemed endless to the 15-mile-a day pioneers but a modern car eats up the distance. Even so, the massive Independence Rocks looms on the horizon for ages before I reached it on my second ride of the day. It takes it name from the fact that the wagons had to be here by July 4 to stand a chance of crossing the Rockies before the worst of winter. The pioneers carved their names into the soft rock, which is also cut by wagon ruts at a site nearby.

At Devil’s Gate on the Sweetwater River, the Mormon Church traditionally cook a meal for the ReRiders, a welcome break in the vastness of the state. Such homely gestures of hospitality mean a lot to the men, and now women as well, who preserve this link with the past in a quiet, dogged Western way that is deep-felt, perhaps the more so for being unspoken.

And what happened to Pony Bob? When the Pony Express collapsed, Haslam rode for other mail companies, then became a Deputy United States Marshall in Salt Lake City. He worked briefly for Buffalo Bill’s Wild West Show but never took to the limelight. The one-time most famous rider in America died quietly in Chicago in 1912, at the age of 72. Buffalo Bill paid for his headstone, the showman commemorating the real thing.

The Pony Express founders also went bankrupt as the company was never a financial success. However, we can perhaps credit Russell, Waddell and Majors with keeping California in the Union at the outbreak of the Civil War because of the ties their Pony Express had forged between East and West. Their company and its riders certainly wrote some of the greatest pages in the history of the USA.

For a full route map and guide, see www.nps.gov/poex

Error: Twitter did not respond. Please wait a few minutes and refresh this page.